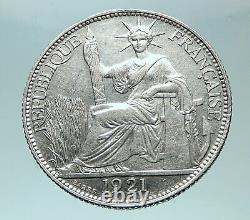 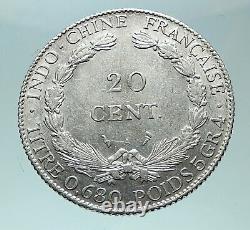 Item: i82036 Authentic Coin of. 1921 A Silver 20 Cent 25.9mm (5.36 grams) 0.680 Silver 0.0984 oz. ASW Reference: KM# 17.1 REPUBLIQUE FRANÇAISE 1930 BARRE, Marianne seated left with fasces, date in exergue INDO-CHINE FRANÇAISE 20 CENT. French Indo-China (now commonly known as French Indochina), officially known as the Indo-Chinese Union (Union indochinoise) after 1887 and the Indo-Chinese Federation (Fédération indochinoise) after 1947, was a grouping of French colonial territories in Southeast Asia. A grouping of the three Vietnamese regions of Tonkin (north), Annam (centre), and Cochinchina (south) with Cambodia was formed in 1887. Laos was added in 1893 and Kwangchow Wan (Kouang-Tchéou-Wan) in 1898. The capital was moved from Saigon (in Cochinchina) to Hanoi (Tonkin) in 1902 and again to Da Lat (Annam) in 1939.

In 1945 it was moved back to Hanoi. After the Fall of France during World War II, the colony was administered by the Vichy government and was under Japanese occupation until March 1945, when the Japanese overthrew the colonial regime. Beginning in May 1941, the Viet Minh, a communist army led by H Chí Minh, began a revolt against the Japanese. In August 1945 they declared Vietnamese independence and extended the war, known as the First Indochina War, against France.

In Saigon, the anti-Communist State of Vietnam, led by former Emperor Bo i, was granted independence in 1949. On 9 November 1953, the Kingdom of Laos and the Kingdom of Cambodia became independent. Following the Geneva Accord of 1954, the French evacuated Vietnam and French Indochina came to an end. World-renowned expert numismatist, enthusiast, author and dealer in authentic ancient Greek, ancient Roman, ancient Byzantine, world coins & more.

What is a certificate of authenticity and what guarantees do you give that the item is authentic? You will be very happy with what you get with the COA; a professional presentation of the coin, with all of the relevant information and a picture of the coin you saw in the listing. Additionally, the coin is inside it's own protective coin flip (holder), with a 2x2 inch description of the coin matching the individual number on the COA. Whether your goal is to collect or give the item as a gift, coins presented like this could be more prized and valued higher than items that were not given such care and attention to. When should I leave feedback?

Please don't leave any negative feedbacks, as it happens sometimes that people rush to leave feedback before letting sufficient time for their order to arrive. The matter of fact is that any issues can be resolved, as reputation is most important to me. My goal is to provide superior products and quality of service. How and where do I learn more about collecting ancient coins? Visit the Guide on How to Use My Store.

For on an overview about using my store, with additional information and links to all other parts of my store which may include educational information on topics you are looking for. The item "1921 A FRENCH INDO-CHINA Genuine OLD Silver 20 Cent Coin France Republic i82036" is in sale since Monday, December 30, 2019. This item is in the category "Coins & Paper Money\Coins\ World\Europe\France". The seller is "highrating_lowprice" and is located in Rego Park, New York.

This item can be shipped worldwide.